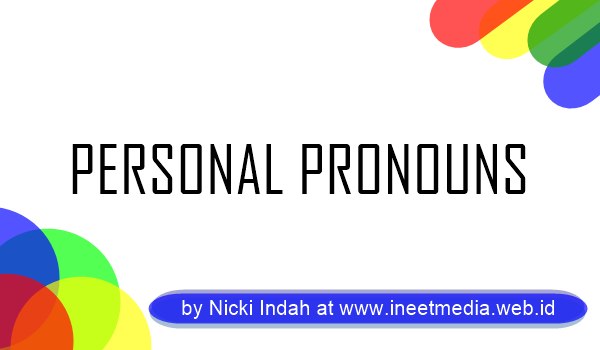 Hello everybody, last week we discussed about form of other. Today, I will explain to you about Personal Pronouns. A Pronoun is used in place of a noun. Pronouns are short words and can do everything that nouns can do. common pronouns are he, she , you, me, I, we, us, this, them, that.

1. The noun it refers to is called the "antecendent" for example :

a) I read a novel. It was good.
In a) : The pronoun it refers to the entecedent noun novel.

b) I read some novels. They were good.
In b) : The pronoun they refers to the entecedent noun some novels.

3. Subjects pronoun are used as subjects of sentences. For example :

d) Budi has a car. He drives to work.

4. Object pronouns are used as the objects of verbs. For example :
e) Tara works in my office. I know him well.

5. Posessive pronouns are not allowed immediately by a noun;they stand alone. For example :

f) That book is hers. Yours is over there.

6. Possesive adjectives are followed immediately by a noun;they do not stand alone. For example :
g) Her book is here. Your book is over there.